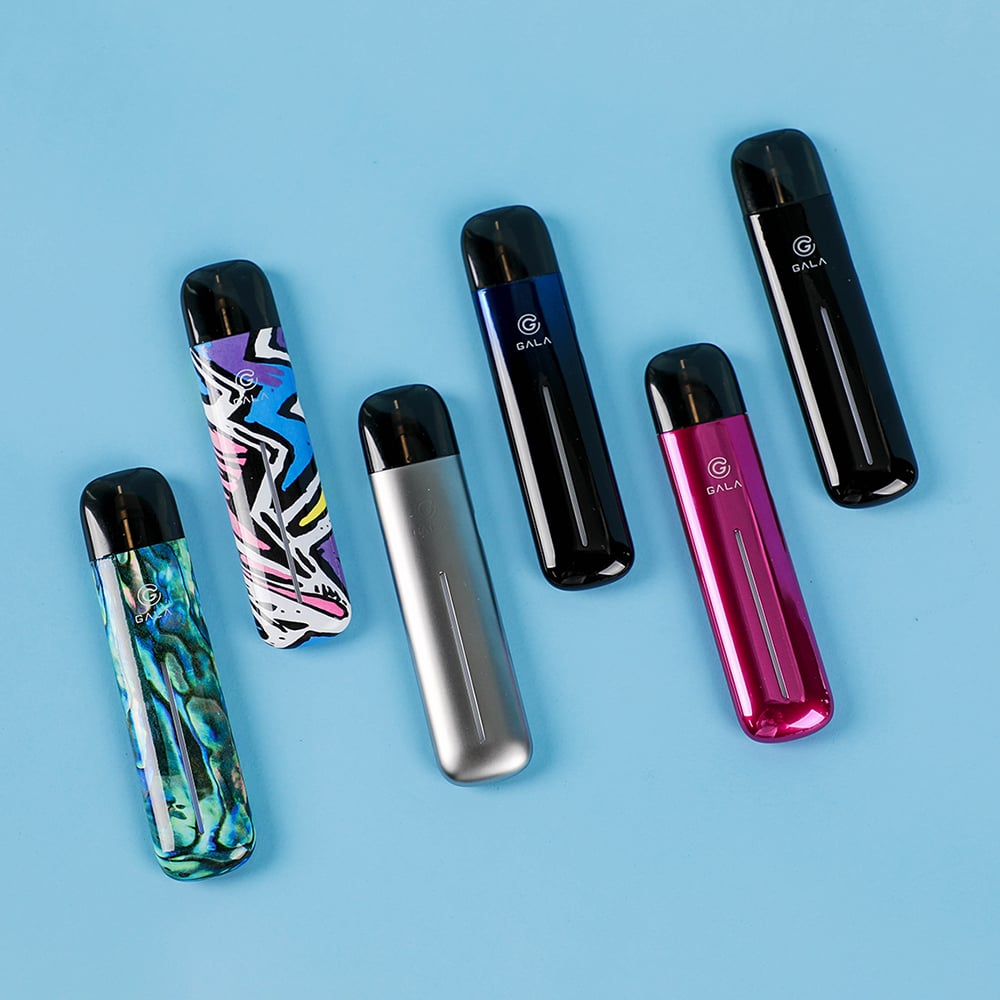 The Gala Pod System by Innokin is another interesting beginner’s device from one of the leading introductory vape manufacturers in the business. From their EQs line to their recent forays with the Z Biip, Innokin is a company known for innovation and user-friendly design, so what’s up with this flashy new Gala Pod System? They really push the big flashy LED bar on the front of this kit, but it’s also a pretty standard pod system aside from that. You get a nice 500mAh battery, a couple mL of juice capacity, and some of their well-respected Plex3D and ceramic coils as well. Let’s find out whether the Gala is your next favorite ultra-portable device or if this party runs out of steam halfway through.

I guess we’ve got some grumpy reviewers here, as not a single one of them were impressed or distracted by the bright flashing lights. The Innokin Gala’s signature feature, the customizable LED bar, wasn’t enough to impress our review panel, but did the Gala do enough things right to earn their coveted recommendation? Let’s break down these pros and cons so you can make a well-informed decision, shall we?

As we’ve already mentioned, the LED light bar just seems pointless. Most people aren’t looking to draw a bunch of extra attention to themselves while vaping, the LED surely causes the device to burn through its smallish battery even more quickly, and it can be difficult to even understand why the lights are flashing at any given moment.

Another significant grievance with the Gala is its ramp-up time. While just about every other high-end pod system out there has a relatively instant ramp-up, the Gala takes at least one hit to get going. Every time you pick up the Gala, if it has been sitting for a while, you’re going to get a weak, flavorless puff of air on your first hit. It’s not until the second or third hit that it really kicks off and starts giving you that flavor. Definitely annoying.

The pods are also rather poorly designed. Each pod has a single fill hole with a sort of bi-valve setup internally. While this is not all that uncommon, it’s a giant pain in the ass to get your liquid to fill both chambers of the pod evenly. You have to tilt and twist and turn and shake the pod to get juice throughout, which is a huge downside for a small, ultra-portable system. Ease-of-use is king with systems like the Gala.

While we’re discussing the pods, it’s worth mentioning just how dang dark they are. It’s almost impossible to see into these pods, making it super difficult to see how much juice you’ve got left. The draw you get is also pretty loose, ranging between a loose MTL and a super restricted DTL. The whole device is also kind of big for a pod system, larger than pretty much any of its competitors with not enough battery to truly compensate for its size.

So the Gala is far from perfect, but there are some bright spots we should touch on before finalizing our decision. The battery life, even though it’s only 500mAh, does last a pretty long time. It also provides some decent to good flavor, depending upon the juice you’re using and your own subjective standards. One reviewer reported using the Gala with all kinds of different juices and, from his report, it holds up to just about any kind of juice you put in it. He also notes that 50/50 or 60/40 juices provide by far the best flavor in this system, however.

Finally, it’s worth noting the overall build quality. Innokin is not a company known for releasing cheap or badly finished products, and the Gala is a testament to that. The LED bar is nice if you’re into it, but more than that, the device feels great in the hand and its clearly built to last. It’s got a nice style, as well, and the LED light bar can be turned off if you’re not into that.

At the end of the day, there’s a few pod systems out there to beat. The Uwell Caliburn, the Orion DNA, and the Smok Nord have really been setting the pace for these types of devices and the Innokin Gala just doesn’t beat any one of them. It does a few things rather well, but it doesn’t do enough things better than the best in its field to really justify picking it up. It’s not even less expensive than its competitors, so it’s very difficult to recommend this unless you absolutely need that customized LED light bar. If you’re trying to put on the sickest vape/LED light show for your friends, pick this up immediately. Otherwise, maybe reconsider.