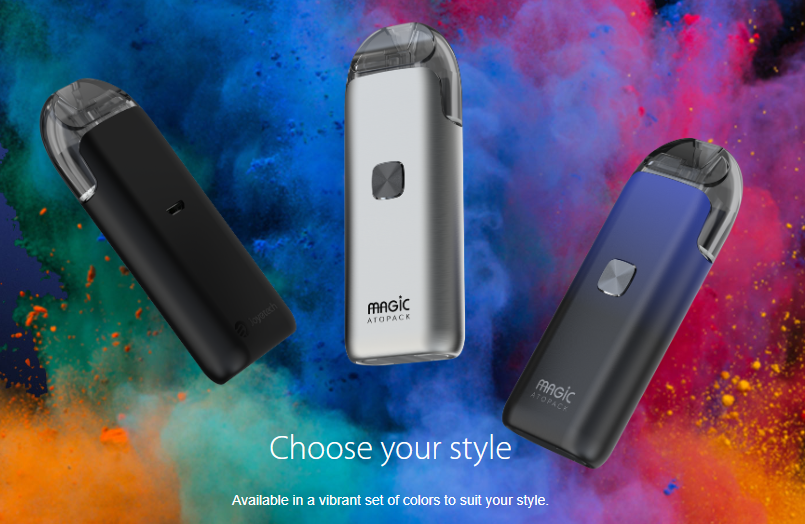 The Magic Atopack by Joyetech is a pretty interesting take on the old familiar pod system. By now, we’re all pretty jaded when it comes to these little pod systems. Is one of them really any better than another when they all include basically the same features and minor variations on an identical form factor? At least the Magic Atopack offers something a little different with their re-wickable pods. You heard that right, these pods come with 50 squares of cotton which you can use to re-wick your pods and extend their lifespan by a significant margin. Pretty innovative, right? This kit also uses Joyetech’s proprietary NCFilm Heating Tech, so you have pods without traditional coils. But is that going to be enough cause to throw this kit into your shopping cart? Let’s find out.

There’s quite a bit more to talk about with the Joyetech Magic Atopack than most other pod systems. With a handful of innovations and some standout features, there’s some strong selling points for this kit, but there are also some significant drawbacks. Will the cons outweigh the pros? It’s all in the eye of the beholder, so let’s dive a little deeper.

One of the biggest cons of the Magic Atopack is quite a big one – the vape quality. While the vape you get off this device isn’t horrendous, you’re going to notice a discernible drop in temperature compared with other pod systems. However the NCFilm heating elements are firing, they don’t quite achieve the higher temperatures and warm vape you may be accustomed to. This leads to a cooler and slightly less flavorful vape than some of the Atopack’s competitors, which is definitely a turn-off. You also have to work a little harder to get a satisfying throat hit and you won’t be able to MTL very well, if at all.

The device is also pretty bulky and heavy. If you’re looking for a small and discreet device, the Atopack is probably outside your comfort zone. You also can’t replace the heating strip itself. While it’s hugely convenient that you can re-wick these pods, it would really be nice (and make sense) to have replaceable heating elements too.

Finally, the airflow only comes in on one side. For some vapers, this can be immensely annoying, creating a sense that you’ve lost hearing in one ear or otherwise playing with your mind. If you’ve never tried a vape with one-sided airflow, you might find that this is a bigger issue than it might first appear. It’s weird, but definitely annoying.

This might seem to be a lengthy list of cons, but I promise you there is a strong upside to the Magic Atopack. We’ve already touched on it a bit, but the pods are re-wickable. This is the kind of thing you may not have known the importance of but being able to switch out the cotton when it begins to go bad can dramatically extend the life of your pods. You’ll still have to pick up a new pod when the heating element goes out but changing the cotton can buy you quite a long time.

You also get some massive battery life in a comfortable device. While we already mentioned how big and heavy the Atopack is, Joyetech did at least use that heft to good purpose. The 1300mAh battery will easily last you all day, even with regular and determined vaping. The 7.0mL juice capacity is also impressive – measuring in at a volume you might expect to find on a full-blown sub-ohm tank. The device is nicely and ergonomically designed too, fitting comfortably in the hand.

Finally, the device features constant output. This is an easily overlooked feature, but it’s actually really nice. While almost all pod systems are direct output devices (meaning the vape quality deteriorates as the battery dies), the Atopack fires at the same voltage all day long. You can actually use all 1300mAh of battery life without having to charge halfway through because it’s not hitting well.

At the end of the day, it’s a little hard to recommend the Atopack Magic. It really does have some cool features and hopefully this can up the ante for other manufacturers who seem to have grown comfortable churning out re-skins of the same old device. On the other hand, the vape quality should really be higher for a device like this and the inability to MTL with its coils combined with the size and weight put the Atopack in an odd place. It doesn’t really fit into any useful category, which leaves it as a kind of oddity. On the other hand, if re-wickable coils, massive battery life, and a huge juice capacity are your pre-requisites for a good pod system, the Magic Atopack is for you.