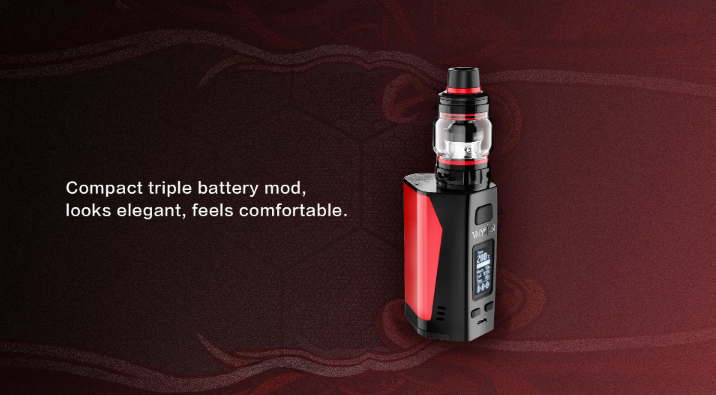 If you’re a flavor-chaser, you’re probably following Uwell’s product launches pretty closely. For a company renowned for their flavorful sub tanks and occasionally decent mods, the Valyrian II is an exciting development. While its predecessor, the Valyrian, wasn’t anything too special and was quickly overshadowed by its little cousin the Crown IV, it did show some promise. While the Crown series catered well to the traditional Uwell fans looking for big flavor and moderate clouds, the Valyrian line seems to be more about high wattage vaping for those seeking power and cloud production. Now, with the Valyrian II, can Uwell right some of the missteps they made with the original Valyrian or will the sequel be just a poor reproduction of the original? Well, we’re here to answer all these questions and more, so let’s get into the specifications of this bad boy, read some reviews, and close it out with some final thoughts.

We’re looking at a significant improvement over the original Valyrian, there’s no doubt about that. If you’re a high-wattage vaper who had expected a little more from the first Valyrian, you would do well to consider this new iteration. Remaining true to its high-power heritage, the Valyrian II manages to fuse that with the flavor production Uwell has made its name on. Let’s start with the few cons we can dig up before singing its praises, however.

One con mentioned by nearly all reviewers has to do with temp control. The Valyrian II mod has some limitations in regard to temperature control, most notably only including a preset for SS904L. That’s it. If you want to use temperature control on say, nickel or titanium, you’re going to be S.O.L. Not actually though, since the mod does include TCR adjustments, meaning you’ll have to enter the information in yourself without relying on a preset. While this may not be a huge deal for experience temp control users, beginners will certainly be turned off by this.

To further complicate the temp control situation, Uwell did not include any SS904L coils in the package. In fact, it’s hard to know what material the included coils even are, although it seems like it’s probably Kanthal. The coils aren’t labeled and it’s not listed on Uwell’s official site either. The chip also doesn’t include any other common features like pre-heat or curve control, which the more advanced users might appreciate.

Other nitpicky concerns include the fact that there’s a slight battery rattle if you shake the whole device kind of hard. Then, for a device with such massive airflow, an 810 drip tip might have been preferable to the included 510. Finally, you’re limited to 26mm tanks or smaller, which is definitely a bummer considering its at triple battery mod and quite wide.

But that’s really it. If you’re not turned off by its limited TC functionality, there’s a lot to love. For one thing, the Valyrian II tank is impressive on just about every front. It produces tremendous flavor, approaching the territory of some FreeMax tanks. You also get a really nice 6.0mL juice capacity, which is to be appreciated given its high-wattage capabilities. You also get really nice airflow which is a touch smoother than most other mesh tanks, while providing a super airy vape for those who prefer it.

While the “self-cleaning” feature sounds a bit misleading, it actually does provide a highly leak-resistant tank, with no reported airflow leaking or other issues that can plague sub-ohm tanks. The coil sleeve design inside the tank allows you to easily change a coil even if your tank is still half-full or half-empty, depending on how you look at things. Finally, the coils are substantially underrated, handling wattages far above their indicated ratings with offers incredible versatility along with great coil lifespan.

The mod itself is a little less exciting than the tank, but still includes some nice features. For instance, it’s an incredibly short and compact mod for running on triple 18650s. With that smaller chassis, you also get a really ergonomic take on the classic triple battery mod shape. You get some nice aesthetics and an attractive finish if you’re into a more glossy appearance. And, this might be a given, but you get ridiculous battery life which can definitely last you all day long at roughly 100W.

The menu is also great, with no complex navigation systems and a sort of barebones approach which is very beginner-friendly. Adjustments are in 1W increments, the display is plenty bright enough for outdoor use, and you get a really convenient hinged top-fill system.

Overall, this system gets a pretty high score. The main issue with it, of course, is its limited TC functionality and lack of advanced features, making it perfect for beginners and veterans who don’t find themselves screwing around with things like pre-heat and curve adjustments. If you’re a straight wattage vaper with a preference for vaping around 100W, this Valyrian II Kit is right up your alley. There also aren’t too many triple-18650 mods out there anymore, so if you like that kind of battery life and power, you’re probably not going to find a better option that this guy 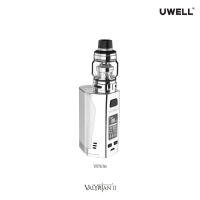