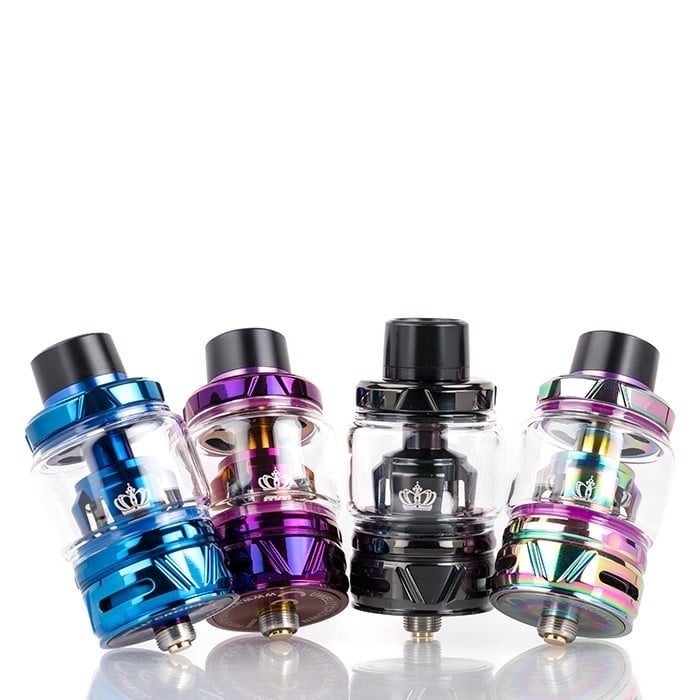 The fourth generation of one of the most recognizable sub-ohm tanks on the market by one of the most respected names in the business? Let’s go! If you’ve been around since the original Crown Sub-Ohm Tank way back when, this latest version of the classic is an exciting moment. So let’s get into the nitty-gritty and find out if Uwell has lived up to the hype or if they dropped the ball and disappointed everyone who believed in them.

So, quite an interesting series of reviews to accompany this landmark sub-ohm tank and some very interesting points to be made, discussed, and mulled over. It’s surprisingly difficult to give this tank a decisive thumbs-up because the problem (singular) with it is so significant, although it can also be easily remedied.

So what is this big problem?? No mesh coils. Boom, I said it. The Uwell Crown IV, released in the year of our Lord 2018, did not ship with mesh coils included. Hard to believe, isn’t it? Well, you better believe it, but before you get your panties in a bunch, let’s hear what Uwell had to say about this. Several reviewers, naturally, reached out to Uwell upon receiving the Crown IV, concerned that it only included standard round wire coils. While these coils were fine, mesh is the industry standard. According to Uwell, the mesh coils they were designing for the Crown IV simply were not ready yet. With a reputation for high standards and quality, Uwell is to be trusted on this one.

So do we give them a pass? It’s kind of hard to do. I mean, sure the included coils are really good for round wire and, sure, the helix mesh coils are available now, but we’re doing a review of the Crown IV as it comes in the package. And no mesh coils included in the package is a huge disappointment.

Other than that, there’s not much wrong here. It can be a little hard to remove the glass the first time, the airflow can be a bit noisy (but which sub-ohm tank doesn’t have that issue?), and not everyone is going to be a fan of Uwell’s threadless coil design. Those issues aside, this is a great tank.

I mean, really, the Uwell Crown IV Sub-Ohm Tank kicks ass. The flavor you get on the included coils is actually surprisingly good. For round wire coils, they actually taste fantastic and last a lot longer than other options too.

You also get one of the best top-fill systems in the game, with four large holes to fill. The build quality is, of course, absolutely top-notch as we’ve come to expect from Uwell, and the 6.0mL juice capacity is nothing to sneeze at.

Now, we’re going to cheat a little bit since we have the advantage of doing this review at a much later date than the reviewers whose videos we included here. By the time we got our Crown IV, the helix mesh coils had been out for quite some time and, let me tell you, the included coils are great but these helix mesh coils are fantastic. Flavorwise, you’re looking at top-tier levels up there with FreeMax and HorizonTech and you should expect roughly 15 tanks worth of life from them. They’re great and, even though they’re not included, you owe it to yourself to pick them up if you grab the Crown IV.

So, there’s the review. It’s a bit tricky to rate overall, but let’s do it like this: if you’re just planning to buy the Crown IV and vape what’s included in the box, you may as well pass on this one. The included coils are fine but just not really worth the price of admission. If, on the other hand, you’re willing to pay another 10 bucks or so to pick up some of the helix mesh coils, this is a clear and decisive recommendation from HandCheck. The Crown IV is a great tank.