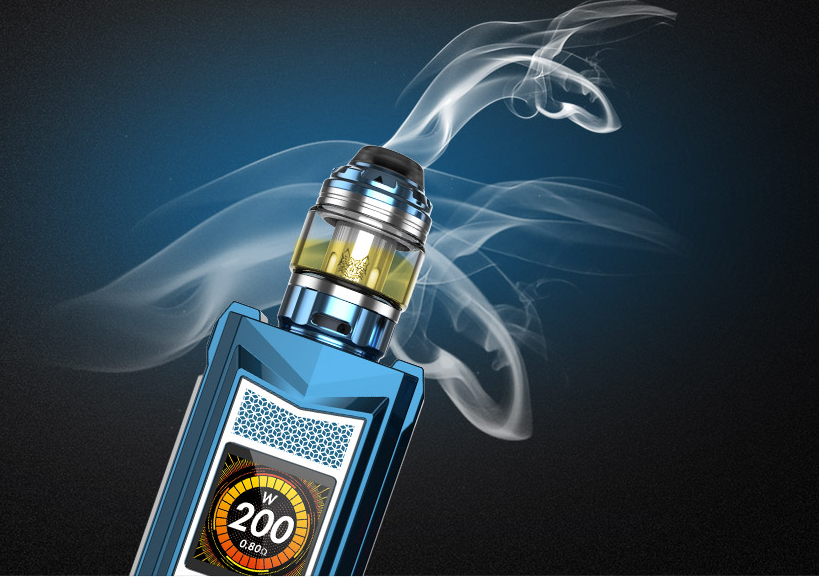 The Mfeng UX Kit by SnowWolf is the latest edition of one of their most recognizable flagship devices. With its signature wolf’s head logo and flashy colors, the Mfeng is unmistakable. But, with such a respectable pedigree behind them, has SnowWolf lived up to their own standards or are they trying to coast off of their past success? Nothing left to do but dive in and find out!

So the newest Mfeng UX Kit might be chalked up as something of a disappointment. On the other hand, you could look at this as the perfect time to pick up a SnowWolf starter kit. It all depends on where you’re standing and how each pro and con in this list affects you personally. So let’s break down each item for discussion, starting with the cons.

The biggest con is pretty straightforward: there’s not a whole lot different here from the previous Mfeng. Yes, they’ve changed the aesthetics by flattening out the 3D wolf’s head and smoothing the firing button, but that’s really about it. You get the same Wolf Sub-Ohm Tank that came with the previous Mfeng and basically the same internal system too. The screen is a little bit different, but that brings us into the next section of cons:

The screen kind of sucks. There’s just not a whole lot of information on display, especially obvious things like voltage and amps. You’d expect that from the first generation of a device, let alone the second. The UI is also not super user-friendly, nor is it particularly customizable. I guess the best way to put it is that the screen feels “old-school” and not in a good way.

The rest of the concerns are fairly minor. You’ve got a fingerprint magnet situation, the battery door has a bit of play to it, and you may encounter some leaking issues if you’re not super careful with tightening everything down. You’re also going to be limited to using the included coils, so let’s hope you’re into that. Finally, the Delrin top cap is a little bit worrisome as it’s Delrin into stainless steel, which could leave you with some stripped threads if you’re not careful.

On the other hand, the Mfeng UX Kit is almost exactly the same as the previous iteration! While this is mostly a mark against this device, it’s also kind of a positive if you look at it right. The original Mfeng was a great device, beloved by many. Instead of changing a bunch of things about it, they’ve gone ahead and added a new screen and updated its aesthetics. If you loved the original, you’d love this one too!

Also, if you were a fan of the original aesthetics but were hesitant to pick up something so big, unwieldy, and gaudy, this new kit eliminates all your problems. The new form factor is far more comfortable than the original and the etched logo is a lot less loud than the 3D wolf’s head on the original. You also get an incredibly fast firing speed, which is cool. What’s more, you get coils that are actually made to handle the wattage this device puts out, which is truly very cool. How often do we see starter kits boasting power up to like 220W and then check the included coils to find they max out at 90W? It happens way more often than it should and SnowWolf really gets that part right.

Other than that, it performs well. Instant ramp up, good flavor, accurate power modes – it does everything you would expect from a high-quality starter kit and it’s built super well. It’s just… it’s frustrating to see SnowWolf copy its own design and pass it off as something new. If you loved the old Mfeng and want an updated version, by all means, you’ll love this. If, on the other hand, the gaudy aesthetics of the first one kept you away, there’s no reason not to grab this new one. At the end of the day, it’s quite a good starter kit – we just wish SnowWolf could have gotten creative with it.