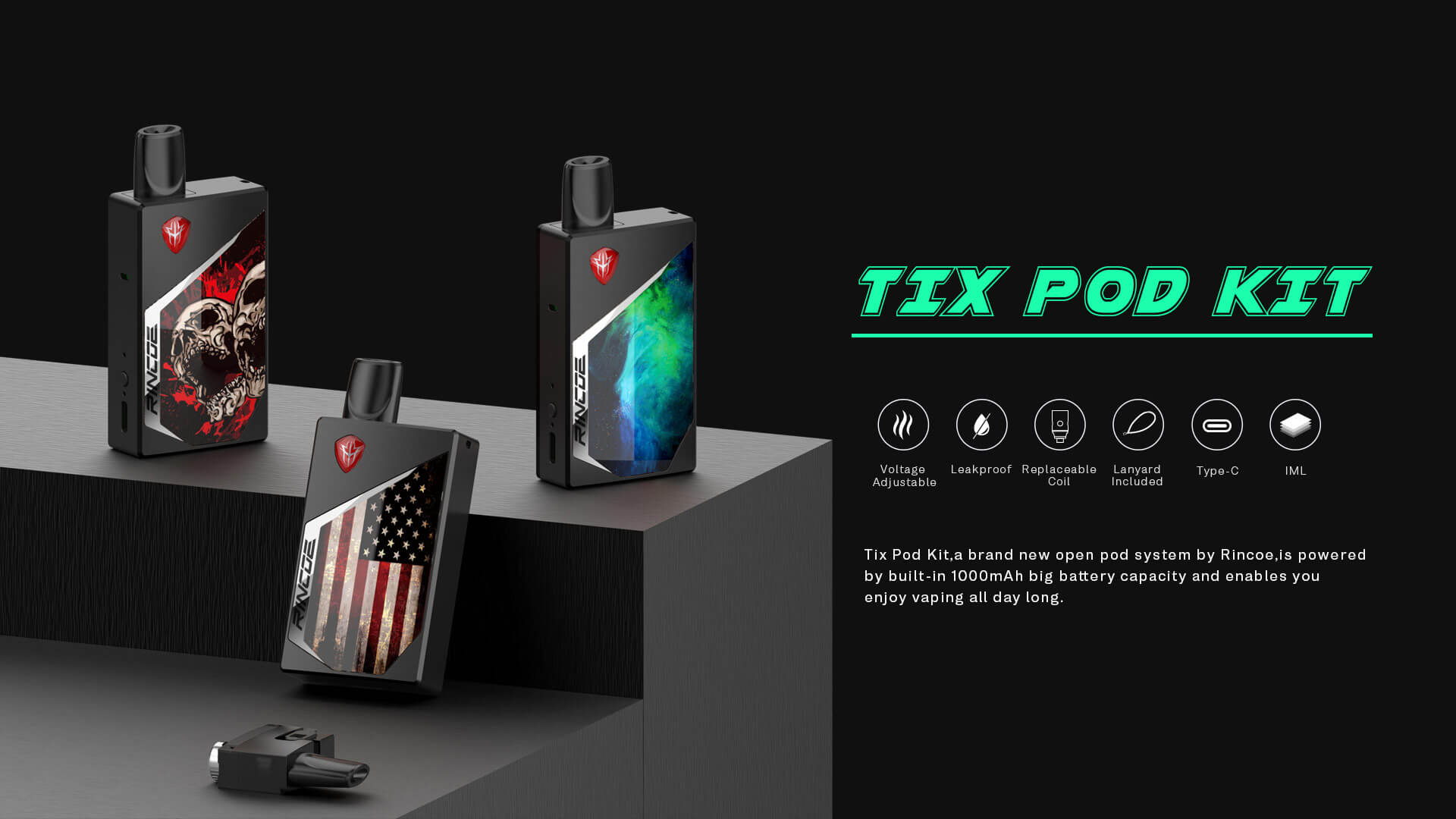 One more Orion-style all-in-one system and we’ll be done with them forever, I promise! (Just kidding, of course, time is a flat circle and the Orion clones will continue in perpetuity) In any case, the Rincoe Tix is another walkie-talkie style AIO-don’t-call-it-a-pod-system device. This unit uses interchangeable coils instead of pods and features Rincoe’s signature designs. If you love the American flag, wolves, or skulls, the Rincoe Tix has got you covered. It also shares a lot of similarities with the Artery Pal System, if you’re familiar with that. You’ve got the removable back panel, adjustable airflow on the inside, etc. But the real question isn’t “what is this thing similar to”, it’s “how does the thing vape??” Let’s take a look under the hood and find out exactly what people are saying about this little guy.

Maybe the Tix isn’t going to be quite enough to win you over if you’ve already gotten your preferred walkie-talkie vape. If you’re the owner of an Orion DNA, the Nord, or the Caliburn, it’s unlikely that this new AIO has anything that’s going to change your mind. On the other hand, it’s not a bad device, with no serious flaws and a handful of nice features which should appeal to most vapers.

The biggest issue with the Rincoe Tix has to be its underpowered vaping. You see, the Tix includes two different coils: the 0.8ohm mesh and the 1.0ohm MTL coil. While a lot of these AIOs are offering coil pairings like this, the Tix feels just a tad underpowered. While the 1.0ohm coil feels great and provides a warm vape, the 0.8ohm coil just doesn’t quite seem to get the power it wants. Given that the kit maxes out at 3.6V, it’s understandable that a mesh coil isn’t going to hit the way you’d like it to, which is disappointing given the performance of the 1.0ohm col. In fact, it’s even more annoying considering the fact that you have adjustable voltage, from 3.2 – 3.6V. Rincoe, it would seem, could have just bumped up the settings a little bit, adding in a 3.8V option on top.

To make the underpowered issue worse, the direct output is a big disappointment, given the adjustable power settings. While the power settings are fine, the kit still pulls directly from the battery. In some devices, the output drop off is hardly noticeable at low battery. In the Rincoe Tix, however, you’re going to feel a major difference, especially if you’re using the mesh coil.

The only other common gripe is people having issues with the fill system, particularly the rubber stopper. Given its nearly symmetrical shape, it’s very easy to mistakenly grab the wrong end. If you do this, and pull on the stopper, there’s a good chance you’ll just rip it straight off the pod. This is annoying, at worst, but it would not have been difficult to simply design better fill ports.

Other minor issues include a lack of compatibility with interchangeable 510 drip tips, a relatively long charging time (1.5hr.), and a bit of play on the removable panel.

The pros list kicks off with the build quality of the mod itself. The back panel feels incredibly nice and chunky. In fact, the entire device feels pretty good in the hand, with a nice heft to it and well-machined parts. The looks are also pretty nice – so long as you’re okay with a little bit of flashiness. Even if you don’t like the skulls and flags theme Rincoe has going on, they do have a solid black option which looks wonderfully minimalist.

While it wasn’t implemented flawlessly, the adjustable voltage settings are certainly appreciated. As more and more of these systems go over to adjustable wattage or voltage, AIO systems which don’t include them are standing out (in a bad way). You also get a pretty nice adjustable airflow system, which offers a smooth draw throughout its entire spectrum, which includes a fairly loose MTL to a rather restricted DTL.

The flavor is also decent, while not incredible. As always, the comparisons are drawn between this and the Caliburn or the Nord, with the Tix not really coming close. On the other hand, it’s still a lot better than probably 50% of pod-based devices out there, so it really isn’t bad.

The little things are also appreciated, i.e. 1000mAh battery size which is quite nice and Type C charging. Thank god more and more of these systems are getting onboard with 21st century technology at last.

Overall, there’s not a whole lot here to push me one way or the other on the Rincoe Tix; it’s almost a perfectly neutral score. It’s got a lot of the important features and only slightly whiffs on the implementation. A cooler vape on the mesh coil is certainly annoying, but not the end of the world. Above average flavor is somewhat disappointing but likely acceptable for a small portable device. I’d say that, if you’re in the market for a small AIO and really enjoy the unique aesthetics of the Rincoe product line, you should get the Tix. Even if you’re just in the market for a decent system and like this form factor, you could do a lot worse. You’re really only going to be disappointed if you’re obsessed with a big warm mesh DTL hit. For anything else, the Tix fits the bill.