Sign in
Login Into Account
Register
My Cart
Categories
📦 Free Shipping On Orders Over $50!
Due to USPS delays we cannot guarantee Delivery Times however we do ship orders same day M-F when placed before 4:00PM PST

The Phiness Vega Pod System is another ultra-portable pod system. You might think we’ve got enough of these things already, but the people love them! The Vega, in particular, showcases some of the things which make these little kits so popular. One of the smallest pod systems on the market, the Vega is the very definition of ultra-portable, but did Vandy Vape have to scrap too many important features to make it so small? Or does it rise above its tiny stature to become a champion in the ultra-competitive pod system arena? Only one way to find out! Onward! 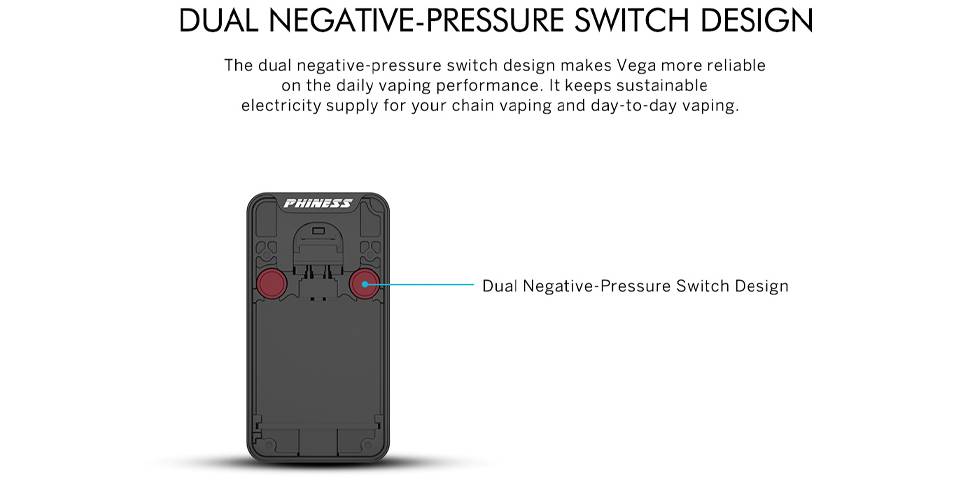 The Phiness Vega – kind of just another pod system, but a super-duper small one. Ultimately, that may be a slightly unfair assessment. For a pod system, the Vega does just fine but it does things that a lot of other systems struggle to do with twice the bulk. So you’ve got to consider that quite a victory. Anyway, let’s break things down even further as we dive into our reviewer pros and cons, beginning with the cons.

There were two things that stood out in every review of the Vega. First, you’ve got the LED light. For some reason, placing an LED light seems to be a thing which plagues far too many pod systems. On the Vega, you’ve got a perfectly functional battery LED, but it’s located on the side of the device for some reason. While you’re actually vaping, it’s almost impossible to see your light. You have to vape, then quickly rotate the device and check the light before it fades away if you’re trying to check your battery life. It’s just a silly and unnecessary design error.

Then, you’ve got the pods. While the Vega technically includes a juice level viewing window, it’s not big enough or located low enough to really check your juice, especially when it dips below a certain level. In order to fully assess your situation, you’re going to have to remove the entire pod from the system and hold it up to the light. It’s not the end of the world, but it definitely is annoying.

The rest of the issues mostly stem from its miniscule form factor. You only get 250mAh of battery life, which is small, even given its size. Using 1.5ohm coils will definitely save your battery life to a certain extent, but it’s still not likely to last you all day if you’re hitting it with any consistency.

Likewise, the juice capacity is pretty small. While it’s larger than a Juul pod at 1.0mL, it’s smaller than the 2.0mL you’ll find in a lot of its competitors and, when you’re dealing with such small amounts, you’re going to definitely feel that difference. Combining this with its inadequate viewing window and you’ve got a surefire recipe for shredding your coil by hitting an empty pod.

Other than that, the Vega holds up pretty well. While it wasn’t a unanimous consensus, the flavor on this system is good by most accounts. You don’t get a whole lot of vapor, obviously, but the vape is still warmer than about 60% of the competition and the flavor is somewhere behind the Uwell Caliburn.

It’s obviously incredibly tiny, but this is really quite a substantial “pro”. As an ultra-portable device, the Vega absolutely nails what Vandy Vape was going for. It disappears completely within the palm of your hand, you can fit it in the pockets of even the skinniest of jeans, and it includes a lanyard for those who prefer them. For portability, the Vega scores pretty much a perfect 10.

It’s also pretty attractive and comes in a massive assortment of colors, styles, and materials. That’s super handy too, for a device you’re going to be bringing out in public with you. Speaking of traveling with it, it’s got a really mess-free top-fill system. It can be hard to get that right on devices this small, but the Vega seems to have nailed it.

While Vandy Vape doesn’t list the device as constant output, multiple reviewers commented that the vape quality doesn’t seem to noticeable degrade until right before the Vega dies. That’s pretty handy as well, and does a lot to offset the miniscule size of its battery.

Finally, it seems like Vandy Vape was pushing this feature more than anybody cared to talk about it, but the Vega has a dual draw activation system. While most of these pod systems only have one sensor, the Vega has two. The effect of this seems to be that you get more consistent firing without as many misfires or the need for a primer puff. Definitely cool, but not as groundbreaking as Vandy Vape may have hoped it would be.

At the end of the day, this device fits exactly one specific need: portability. If you’re looking for a tiny, portable pod system, the Vega will fit the bill perfectly. You’re not going to be sitting at home vaping on this thing nor is it going to replace your fancy RDA, but if you just need something discreet for vaping on the go, grab the Vega.