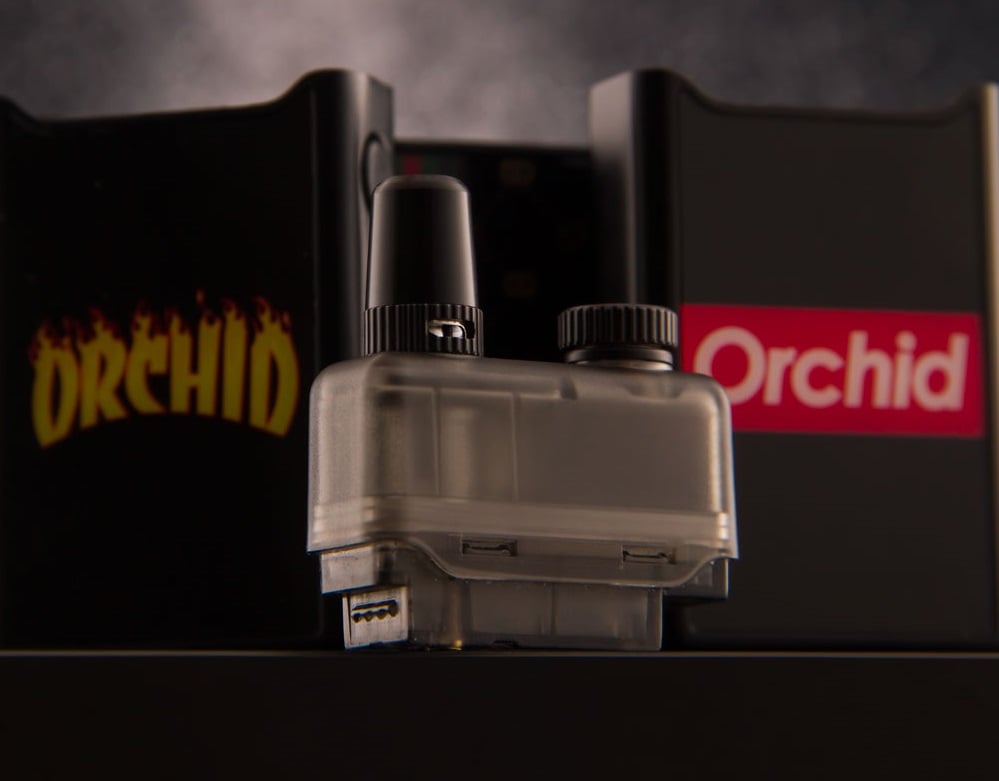 Another day, another pod system! But the Orchid is, of course, not just another pod system. Sure, they all claim to offer something new, different, and exciting, but it’s clear from the first glance that the Orchid has very obviously brought at least one new thing to the pod system table, namely it’s full-featured chipset and box mod style LED screen. If you’re looking for a pod system which offers full control over your vape experience, this is really the only game in town – but does it work as well as it should? Or is it just a fancy trick?

I don’t know about you, but I can definitely be something of a control freak when it comes to my vaping. I love customizable options to the point where I can easily be sucked into certain gimmicks. Fortunately, I’ve got these trusted reviewers to help me out, and I’m honored to share their expertise for you. Without building an unnecessary amount of suspense, the Orchid is actually a pretty cool device. We have to begin with the cons, as always, but stay tuned for the pros as well, since you definitely want to learn everything you can about this pod system.

Probably the most important con with this pod system is the fact that you’re not looking at a true, restricted MTL device. If you’re a big fan of that super-tight, cigarette-like draw you can sometimes get with MTL vapes, this isn’t the pod system you’re looking for. Even with the airflow fully restricted, the Orchid has way too much airflow for a really tight MTL vape. If that’s okay with you, read on!

The Orchid’s puff counter also resets to zero when you turn the device. Sure, this isn’t the end of the world and there’s at least a decent chance that they’ll remedy this situation with firmware upgrades, but it’s definitely kind of annoying in the meantime. Some of the designs also include an Orchid logo on the sides. Unfortunately, these logos are stickers, which is kind of tacky, so you may be better off with the logo-less pattern styles if you hate stickers (as I do).

One reviewer also pointed out that the coils take a super long time to prime, so be aware of that to avoid burning out your pods. This device also includes a proprietary drip tip which is incompatible with the Orion system. This is certainly disappointing in an age where sub-ohm tanks have a more-or-less universal drip tip setup, allowing for greater customization and cross-compatibility.

None of these cons are particularly significant, thus far, but the pros are definitely something to look at. For one thing, it’s got all the features you might expect from a much larger, much more expensive vape system. You get temperature control, voltage mode, and adjustable wattage – all accessed via a handy LCD screen. This makes the device super versatile while also allowing you to dial in your exact preferences with impressive precision.

You also get really nice flavor on the coils, with some saying it completely blows the Orion out of the water. Quite a claim to make when coming for the throne of the pod system king!

The device is also very attractive, rocking that tried-and-true form factor we’re seeing so much of lately but making it their own. You can choose from all kinds of styles, ranging from a Louis Vitton kind of vibe to a simple black and white with logo. Always nice when a company includes such a range of options. You also get some dry hit protection, a big battery, big juice capacity, and a huge viewing window on the pods to check your juice levels super easily.

There’s one single catch to this device. If you absolutely need that pinhole, tight MTL draw, this device isn’t for you. If, however, you’re in the market for a new pod system, there’s no other reason not to opt for this one. From its flavor to its incredible host of features, the Orchid Pod System is truly in a class of its own.