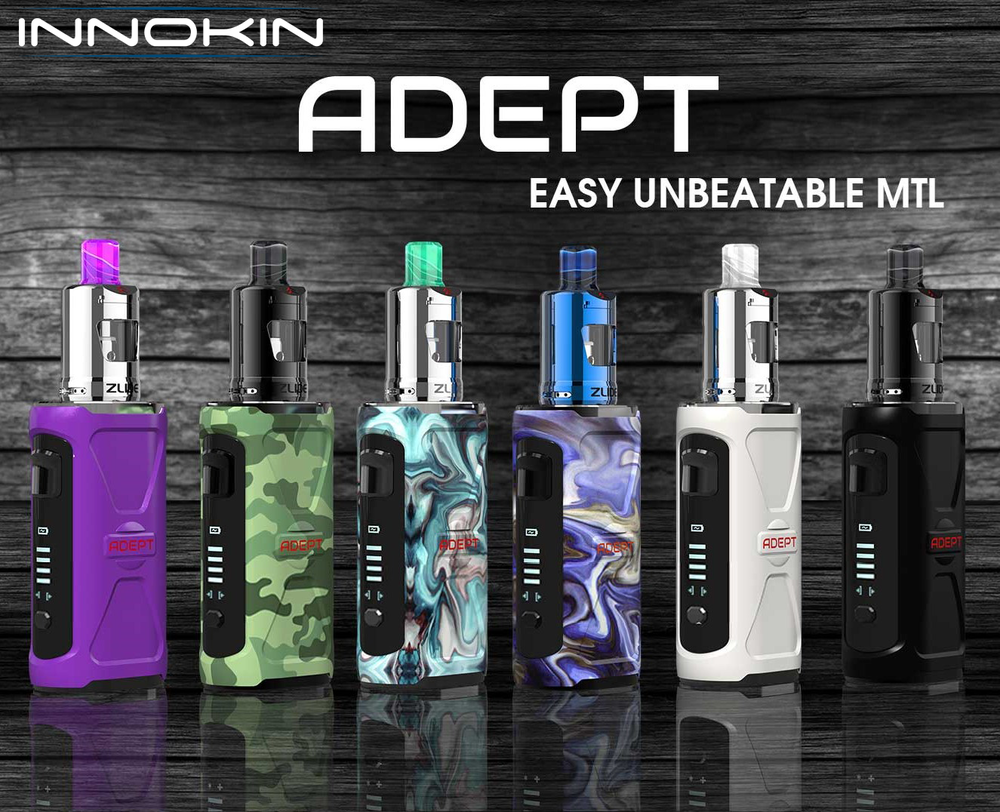 A few months ago, Innokin came out with the Zlide MTL tank. At the time, this tank was pretty well received, with many people saying they could finally upgrade their Zenith or Nautilus tanks, now that there was a real contender on the market. It took Innokin a little longer to craft the Zlide’s partner in the Adept box mod, but here we are. Having teamed up with P. Busardo and the Vaping Greek, Innokin have set out to create the ultimate MTL kit – but have they succeeded. Sure, they’ve got a pretty long run of successful beginner/MTL devices coming out over the last few years. Is this another one to add to your collection?

Overall, the Innokin Adept Zlide Starter Kit is for a pretty specific type of vaper. We’re going to get into all the details shortly, but just be aware that whether you like this or not is going to be pretty cut-and-dry. So let’s hear the cons first, as usual.

There’s not a whole lot objectively wrong with he Innokin Adept Zlide. Some of the more annoying features of the system are also some of its least impactful. Some of them can easily be remedied at home, too. For instance, the drip tip features a childproofing mechanism, meaning that you have to fully remove the drip tip in order to slide back the top cap and fill your tank. This is annoying for most people, sure, but you can also just swap out the drip tip for another one (they even include a second tip) or you can cut the childproofing feature off the pre-installed tip. Not a huge deal.

Same issue with the USB port. While a lot of people are going to be annoyed that they put the charging port on the bottom, even more people will get bothered by the rubber flap which goes over it. This flap can definitely be a pain in the ass to open, especially for those without nails. On the other hand, this flap was included in order for this kit to maintain its shockproof, dustproof, and waterproof rating. So it’s not like they did it for no reason; you get a nice feature at the expense of a certain measure of convenience. Whether the trade-off is worth it is up to you!

Finally, and this is where we’re going to lose a bunch of people, this is an MTL-only device. Period. There’s no room for discussion on that point. I know, it looks like a normal box mod, it’s got 3000mAh battery life, but it maxes out at 17W, even while vaping sub-ohm. Now, it’s understandable that Innokin were trying to create a starter kit which would appeal specifically to beginners and the MTL crowd, but it’s definitely a little lame that they gated the box mod at such low wattage. Surely this device would be able to handle MTL vaping just fine, even if it went up to 80W.

Aside from that, it’s all pros. If you’re into MTL vaping – and we’re talking that true, restrictive MTL vaping – you’re going to love this kit. You get a really tight and authentic MTL experience with this tank and, by most accounts, you’ll get above average flavor too.

The entire starter kit is very simple and beginner-friendly, as well, with no extraneous features or complicated menus to scroll through. You’re going to get some automatic power outputs at different resistance levels, and that’s really it.

The device is also super solid, in addition to all its proofing. It’s got a nice, rubbery, texturized finish that feels really nice in the hand and there’s no rattle at all. You can tell some real care and craftmanship went into this thing, giving it a premium feel. For MTL vapers who are too often left with lower end manufacturing and forced into buying inexpensive pod systems, this premium quality is sure to go a long way.

Finally, you get that massive 3000mAh battery. When you’re vaping MTL at less than 17W, this thing is going to literally last for multiple days on end, depending on how much you vape. It also makes perfect sense to use an internal battery for a device like this, where it might be considered a con in a DTL device. Since you’re going to be charging it less frequently, your internal battery lifespan should be significantly longer than it would be in a comparable 80W device, for instance.

There’s a lot of good things to say about this starter kit, which is why its limitations are so frustrating. If you’re an MTL enthusiast or a beginning vaper, there’s no question that this is a great pickup. On the other hand, there’s literally nothing here for people who enjoy vaping at higher wattages or using lower nicotine e-liquid. It would have been a really nice move to just add options for higher wattages and allow people to use their own sub-ohm tanks or rebuildable attys. So that’s really what it boils down to. Do you love a tight MTL vape? Get this. Are you not into MTL vaping? Pass on this. That simple.