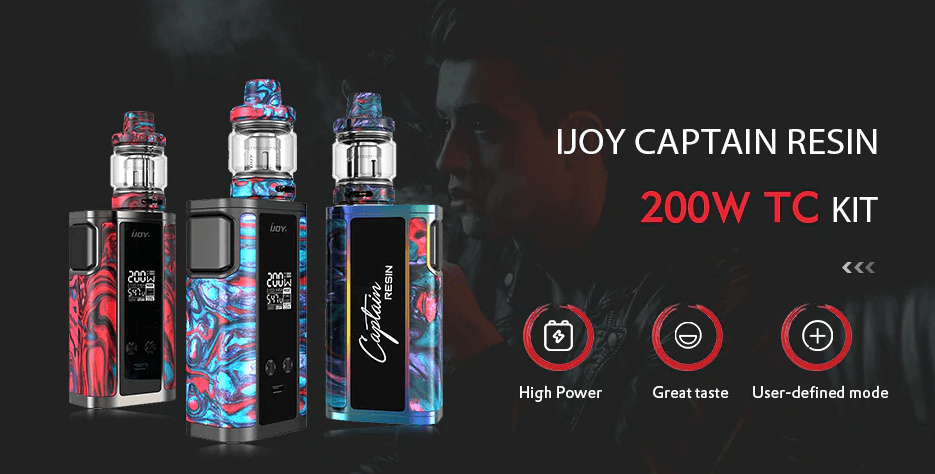 Well… there’s a lot to be said here and I think that once you get through the pros and cons, you’ll have a pretty clear picture of what’s going on. Can’t really say much up top without giving it all away, so… without further ado, here’s the Captain Resin Kit by iJoy.

Whew! So this is one doozy of a review. Here on HandCheck, I hate to ever fully bash any product. I like to think that just about every vape product out there is made in good faith and that manufacturers are really doing their best to make a product that fits some kind of niche and will fit perfectly in someone’s collection. It takes all kinds, different strokes for different folks, etc. Unfortunately, the iJoy Captain Resin Kit is a disappointing exception.

To fully understand what’s going on with these reviewers pros and cons lists, it’s important to have a little background on this kit. The iJoy Captain 20700 was released about a year ago, and it was a pretty popular and innovative kit for its time. The original Captain introduced 20700 batteries back when 18650s were the industry standard. These bigger batteries were something to talk about and the kit also performed pretty well overall.

Fast-forward to 2019. What you’re looking at with this kit is literally the exact same device you would have picked up over a year ago. While the industry has moved on to bigger and better batteries, this iteration of the Captain features the exact same 20700 batteries that were innovative a year ago – not so much anymore. But this isn’t even the most egregious transgression by iJoy.

That dubious accolade goes to the “resin panels”, you know – the entire reason for this re-release in the first place. As two of our reviewers point out in excruciating detail, these resin panels are literally just colorful rubber stickers that iJoy has tried to pass off as genuine resin. It’s such a sad and cynical move on their part that it’s hard not to be outraged. This entire kit is literally the same thing they released a long time ago, just with a couple stickers on the side and a $20 bump in price. A truly shameful ploy to wring money out of people who may have loved the original Captain.

When a company makes such a deeply cynical blunder, it’s hard to view them as having anything but contempt for their customers. It’s the kind of thing that entirely undoes the rest of the kit, which would have probably been more or less fine on its own merits. The flavor is okay, the coils perform decently, but at the end of the day, why pick this up when you could just get the original for a fraction of the price? iJoy – do better, we don’t deserve this.