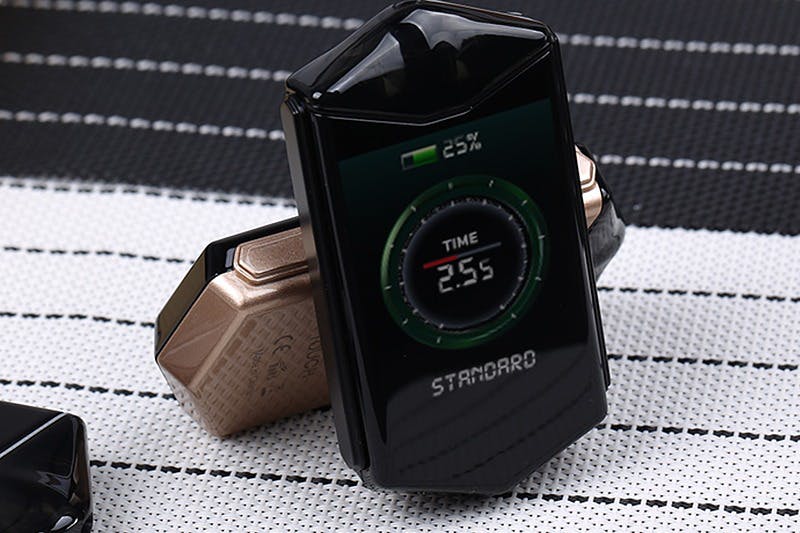 The Asvape Touch Pod System is an interesting new innovation in the world of pod systems. While most companies are busy trying to figure out how to create a walkie-talkie style device which somehow isn’t exactly like the 230 other systems, Asvape decided to go a different route. The Touch is a sleek and futuristic-looking pod system with, you guessed it, a touch screen. This is definitely a new direction for pod systems, but how well does Asvape actually implement this feature? We’ve seen a lot of companies try to break ground in a futuristic direction only to shoot themselves in the foot and go backwards. Maybe Asvape will break the mold! Let’s see.

A bit disappointing to not be able to give you guys a hard pass or full-blown endorsement for something like this. As it turns out, the Asvape Touch Pod System kind of walks the middle of the road, with about an equal number of things in its pros and cons list.

The first major con is the button rattle. For a device which costs upwards of $45, it’s fair to find extreme fault with quality issues like this. The whole thing looks so sleek and attractive, yet it rattles when you move it too quickly. Very annoying. Other issues with the quality include the mouthpiece/airflow situation. The mouthpiece is incredibly small and close to the coil, which, while great for flavor, also puts it into contention for the most uncomfortable mouthpiece of all time. And, if your mouth is on the larger side and you end up putting the whole top of the kit into your mouth, guess what – you’re blocking the airflow! Not a great design to kick things off.

Then, you get into some of the more nitpicky concerns. First up, it’s only suitable for 50/50 VG/PG juices. Anything thicker is going to give you a lot of spitback and leaking. Definitely annoying, but it is a pod system, so most people are probably looking at nicotine salts and thinner juices anyway.

Then, you’ve got a pretty dim screen, which doubles as a fingerprint magnet. But, again, these are issues you’re going to run into with about half the devices out there. If it’s a deal breaker, it’s going to drive you nuts. If not, don’t even worry about it.

Finally, the pod is a little bit loose, the quality goes down as the battery drains, and then there’s the pricing issues. It’s a very expensive system and you only get one pod. Totally unacceptable for most people, unless the pros on this list blow you away. Spoiler alert: they’re probably not going to.

The biggest selling point of this device is its draw. If you’re constantly feeling ignored by companies releasing loose MTL pod systems, this is your moment to be seen. The Touch has an incredibly tight draw, with some reviewers even saying it’s tighter than the Juul, which is one hell of a claim. Either way, it’s got a super tight, warm MTL draw which is going to be perfect for those who like it.

You also get a bunch of customization options. First, you’ve got the three power modes which, while Asvape didn’t specify exactly what they do, are noticeable nonetheless and can provide you with a pretty hot vape. You can even add your own wallpapers to the home screen, which is neat.

The touch aspect of this kit is going to be a pro for some, con for others, but it works well enough. The screen feels accurate, although it can be easy to accidentally change the power settings, for instance. It also provides you with a wealth of useful information, including battery percentage, puff counter, and easy access to all its settings. So that’s pretty nice.

Finally, the flavor is good. Nothing remarkable or groundbreaking, but certainly good enough for a pod system.

The entire attitude of this final thoughts section is going to be filtered through the Touch’s price point. You’re looking to spend at least $45 on this thing, which is going to be super hard to justify for the people who might actually benefit from this system. Naturally, the demographic to whom this kit would most appeal is the recent ex-smoker. With its tight draw, simple functionality, and a puff counter, it’s absolutely ideal for the recent convert. On the other hand, a supposed benefit of vaping, in addition to health stuff, is saving money. As one of the most expensive pod systems out there, that’s one box this kit definitely does not check. But if you are a smoker looking to switch, you could do a lot worse for yourself. Same thing goes for the true MTL die-hards out there. Other than that, feel free to steer clear – your money is better spent elsewhere.