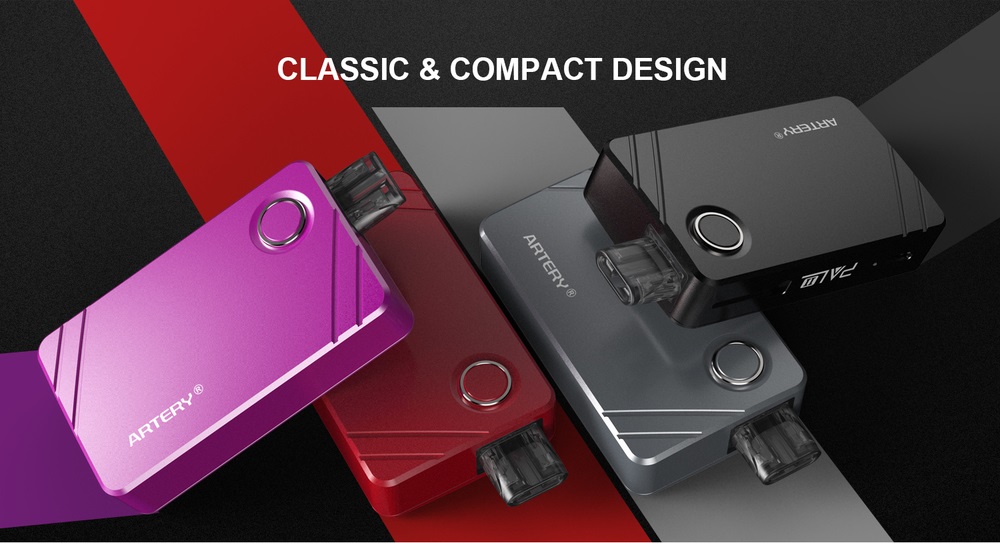 The PAL II by Artery is, of course, the sequel to their previous PAL System, this time designed with the assistance of Tony B. from Vapor Trail. As an all-in-one device, one of the most appealing elements of this device is its dual function. It includes both a 0.6ohm DTL coil and a 1.2ohm MTL coil, with adjustable airflow meant to accommodate each style of vaping. With a  large 1000mAh battery capacity and a moderate 3.0mL juice capacity, is this new system the pinnacle of AIO innovation or does it fail to live up to the hype? You’ll have to read on to hear from our reviewers and find out!

-          Have to watch hand placement to avoid covering airflow

-          Packaging is terrible, slapped together with all kinds of misprints and generic box

The Artery PAL II AIO kicked up a bit of controversy among some of our reviewers. That having been said, it’s important to note that there was primarily one reviewer who took issue with some primarily cosmetic issues that none of the other reviewers seemed to experience. Either that or they didn’t notice or think the issues were worth mentioning. Either way, let’s take these critiques with a grain of salt and hear all perspectives on this device, starting with the cons.

Let’s get Jai Haze’s review out of the way first. He demonstrated several slapdash oversights in his video, including stickers which covered up hasty typos and design errors and also showed that his device did not include a pod. This oversight seemed a bit significant, although none of the other reviewers mentioned. Here, we’ll just point out that it is worth confirming with your distributor whether or not the device you’re ordering includes the pod. The system cannot function without pods, so make sure you either have one included in your package or you pick one up separately.

Other than that, reviewers didn’t necessarily love the mouthpiece and airflow setup. Jai points out that you have to be careful with your hand placement so as not to cover the airflow, while Mike Vapes demonstrates the annoying amount of steps involved with changing the airflow. The mouthpiece is also rectangular, meaning you can only hit it comfortably from a certain angle. While the reviewers would have preferred a standard 510 drip tip, they do admit that the draw and feel of the included tip isn’t all that bad.

The pros for this device begin with the draw. Each reviewer gave glowing commendations to the warm, hard-hitting draw you get off this device – particularly with the 0.6ohm mesh coil. The 1.2ohm coil received more of a lukewarm response, as it was more of a lukewarm, slower ramping MTL hit with an loose airflow. The build quality is great with no rattling or movement on the battery door. It’s got changeable coils, which is a huge plus. It also fits very comfortable in the hands and includes a good long battery life.

All in all, this all-in-one isn’t a bad device. If you’re okay using this primarily as a portable, restricted lung hit device, you’re in the right place. If you’re all about that super-tight, restricted MTL hit, you may want to pass. For most vapers considering portable pod-like AIO devices, the Artery PAL II will fit the bill just about precisely, however. Just have a little bit of patience with the airflow and understand that you’re getting primarily a restricted lung hit and you sure won’t be disappointed!